Our first destination in Portugal was Belém, a relatively short distance from the city centre of Lisbon. We decided to take the electric tram 15E…and so did what seemed like millions of others. My goodness, it was probably the worst tram ride in my life. In retrospect, travelling by tuktuk would have been more comfortable and more fun, but the guy hustling for customers looked dodgy, so we didn’t go for it. I remember having to brave the Amsterdam metros daily, when I still commuted that way, and being overjoyed for not having to do that anymore. Sardines in a tin can probably have more space. On a side note, sardines are a thing in Lisbon but I didn’t feel like joining in on that *thing* because I’m not hugely into fish.

But I digress. It was so hot and crowded on the tram that we could barely breathe. Interestingly enough, there was a family who decided it was a smart idea to take their small child into this craziness. The family had gotten on the tram later than we did, but the mother still felt it was her right to tell off anyone that wanted to enter the tram after her. The child, being small (about 5 or 6 years), had even less air to breathe and was basically *this* close to fainting. I felt bad for the kid and she probably felt even too miserable to put up a fight.

After we survived the tram ride, we headed out and had a nice walk along the Tagus river. It was overcast, quite chilly and windy, and we had some rain. We didn’t mind, because we wore rain jackets and sturdy walking shoes, and enjoyed being outside with our noses in the wind. 🙂 We were headed towards the Belém Tower, but first got to Padrão dos Descobrimentos (Monument to the Discoveries). This monument celebrates the Portugese Age of Discoveries in the 15th and 16th centuries. I have to admit, I thought it was a fascinating monument, because of its design and location. 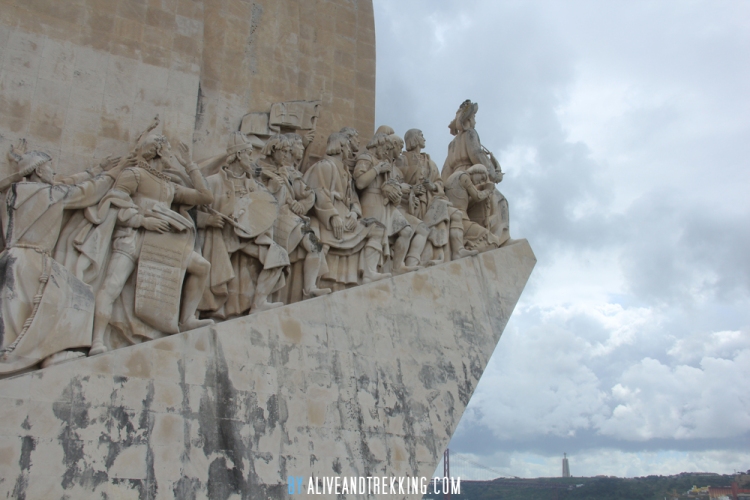