We learned on the bus tour after we first arrived on Spitsbergen, that you can’t keep your huskies in your home. They make too much noise for residential areas, especially if you have a bunch of them. So there are these places out of town where dog owners can house their huskies. If you want to see your dog, you have to make a bit more effort to do so! Also, huskies really are working dogs. I don’t think they’d be very happy confined in a small space anyway. They need to roam and run! And they’re a hearty bunch…they’re outside all the time! Of course they have shelter, but some dogs seem to prefer staying outside. Brrrr…

The next day we had a husky tour planned! This has been a bucket listed item of mine since forever! We had been split into three groups. My group had a very skilled guide from Denmark. It took a while before all the dogs were lined up. Not only because we tourists have no idea what to do anyway and aren’t of much help, haha, but also, because these dogs are so excited! They jump half the time because they know it won’t take long before they can actually run!

Before we could get anywhere near a sled, we had to get dressed. Weather conditions were poor. It was very cold, there were heavy winds. I had long woolen thermal undies, a windstopper fleece jacket, a winter coat, a woolen scarf, a balaclava, a hat (provided), ski pants, two pairs of thick woolen socks, boots (provided), liner gloves, thick woolen/leather gloves (provided), ski goggles (which froze on the inside!) and a thermal overall (provided). Let’s just say it took a while to get dressed! But you need all those layers, because the cold cuts through just like that. I believe it was around -20C° with a feel temperature of so much colder!

We had been instructed on what to do (brake, anchor, voice commands) and out we went! We went in pairs and I was the first of us to drive. I was right behind the instructor, which turned out to be a really awesome position. I could keep an eye out on what he was doing, for as far as I could see. We had white out conditions, so that was ‘fun’. It was bloody cold, but also heaps of fun to be driving. And the dogs were so excited! Every time we slowed down they started to yelp, because they wanted to go!

There was apparently some hassle in front of us, and the situation was very unclear. We stood still for quite a while. Well…still…Despite standing on the brake and having put the anchor in, the dogs still pulled me forward! So the guide came and jumped on the brake with me and buried the anchor even more. Pfew! Because driving further than our guide wasn’t part of my plan! I decided to try out the voice command for ‘easy now’ from then on and that really worked! The lead dog kept looking back at me to check if they could start running again. At least, if felt like he or she did. And he or she responded very well to the voice command, which made the driving so much better and, importantly, more controlled! It was amazing and I would absolutely love to do it again, albeit under less extreme circumstances.

Our group didn’t have much trouble, but later I learnt that at least one other group did (the aforementioned hassle). People had fallen over, dogs had run away and apparently the guide was inexperienced and lacked control. Really sucks to hear that, but it’s also very irresponsible. Because you’re out of town, you’re in polar bear country in white out conditions and some of that group was left alone for a while! Apparently our tour guides were in that group and they were not happy! Later we learnt that they talked with the organisation because they felt it was highly irresponsible to be going out in these conditions in the first place, let alone having someone not be on top of things. They had arranged for everyone to get part of their money back and we did.

While I agree that the conditions were extreme, I still had an amazing experience. I have no way of comparing it to another situation as I’ve never done anything like this before. But in retrospect, I do see and agree that different choices could have been made. I was lucky, I guess, to be in the group with a skilled guide. 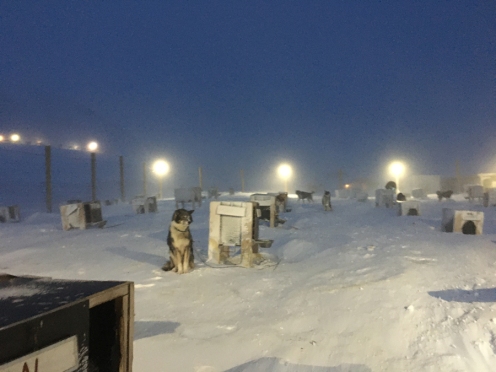 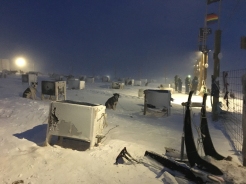