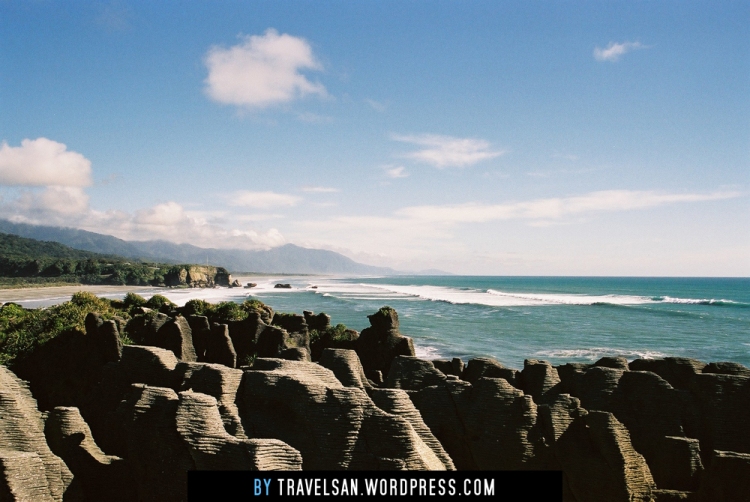 Punakaiki is a small community on the West Coast of the South Island of New Zealand, between Westport and Greymouth. The community lies on the edge of the Paparoa National Park. The Pancake Rocks are a very popular tourist goal at Dolomite Point south of the main village. The Pancake Rocks are a heavily eroded limestone area where the sea bursts through several vertical blowholes during high tides. Together with the ‘pancake’-layering of the limestone (created by immense pressure on alternating hard and soft layers of marine creatures and plant sediments), these form the main attraction of the area. (source).

I love the pancake rocks. They are so different from other natural phenomena, due to the extensive layering of the rocks. There’s a nice walkway so you can see different forms and formations. Some of the rocks even look like faces or a group of people. What I really like is that when you do down from Nelson to Greymouth, or vice versa, the Intercity coach schedules a break there, so that even when you are pressed for time and can’t go out of your way to see the pancake rocks, you still get the chance to have a look! That’s what I did the second time around. I took this photo the first time I was in Punakaiki. I had more time then because I travelled around with a campervan, still the best way to see this beautiful country.

Have you seen unusual natural phenomena or interesting features in the landscape?